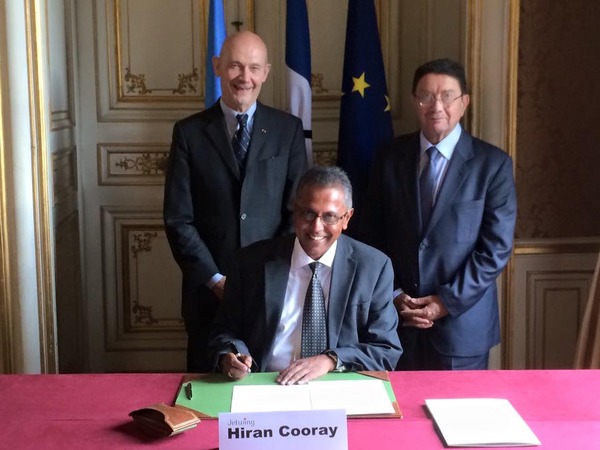 France: Sri Lanka made history once again, with the signing of the United Nations World Tourism Organisation’s Global Code of Ethics for Tourism (GCET) by premier hospitality brand Jetwing. The ceremony took place in Paris, France and Jetwing is the first company in Sri Lanka to sign the Code of Ethics.

Adopted in 1999 by the General Assembly of the World Tourism Organisations as a fundamental frame of reference for responsible and sustainable tourism, the Global Code of Ethics for Tourism (GCET) is a comprehensive set of principles designed to guide key-players in tourism development.

With the intention of reaching governments, the travel industry, communities and tourists alike, the Code aims to help maximise the sector’s benefits while minimising its potentially negative impact on the environment, cultural heritage and societies across the globe.

The Code’s 10 principles amply cover the economic, social, cultural and environmental components of travel and tourism; including tourism’s contribution to mutual understanding and respect between peoples and societies, a vehicle for individual and collective fulfillment, obligations of stakeholders in tourism development, and rights of workers and entrepreneurs in the tourism industry amongst others.

Signing on behalf of Jetwing was Jetwing Chairman Hiran Cooray, in the presence of UNWTO Secretary General Taleb Rifai, and World Committee on Tourism Ethics (WCTE) Chairman Pascal Lamy. Hiran Cooray is also the first South Asian representative to be appointed as an alternate member to the WCTE, a position approved by the 20th UNWTO General Assembly in 2013.

“Jetwing is a family that has been deeply ingrained in the inception and development of the tourism industry in Sri Lanka, ever since my father began this journey over 40 years ago. We have learnt much from the world around us whilst we were struggling during the war, and today we are on a level playing field – where we go from here rests solely on our shoulders,” said Hiran Cooray.

“Being a signatory of the UNWTO Global Code of Ethics now brings us a clear and comprehensive framework, with which I am confident we will see both Jetwing and Sri Lanka rise to new heights internationally,” he continued.

“We at UNWTO very much welcome Jetwing Hotels’ pioneering in signing the Private Sector Commitment to the Global Code of Ethics and fully committing to advancing responsible, sustainable and inclusive tourism in Sri Lanka and beyond. The private sector plays a key role in creating a more ethical tourism sector and I hope more companies in Sri Lanka will follow Jetwing Hotels’ example and leadership,” said UNWTO Secretary General Taleb Rifai.

Jetwing Hotels is family owned and in the tourism industry for the past 43 years.