Chick peas, that popular Spanish tapa (as garbanzos) and the main ingredient in hummus, the paste from the Middle East popular in the USA, are a favourite street food of Sri Lankans. In Sri Lanka, chick peas are known as kadala, the equivalent of gram in India, from where they are imported.

The name isn’t derived from the gram being peas for chicks. The word chick is the English equivalent of the French name for the gram as chicke which stems from the Latin, cicer. A quote in a medieval cookery book refers to “Cich or Ciche Pease.” It is a legume of the Fabacceae family and very high in protein.

The nutritious benefits of chick peas are amazing but I think Sri Lankans like them more for their taste than because of the health benefits. They are consumed with enthusiastic relish (and with spicy relish too) as a snack (“bite” in local parlance) when having a drink.

In front of my cottage on the west coast of Sri Lanka, villagers get together every year in June to prepare vast cauldrons of kadala to distribute as alms to passers by in the tradition of the Poson Poya full moon Buddhist holiday.

Kadala in Sri Lanka is sold in a dried form, currently at Rs125 for 500g. Look for a recipe on how to cook it in local cook books and they are oddly uninformative on this popular street food. One book says boil the chick peas quickly for 10 minutes, drain and then boil again for three to four hours until tender the pea are tender. 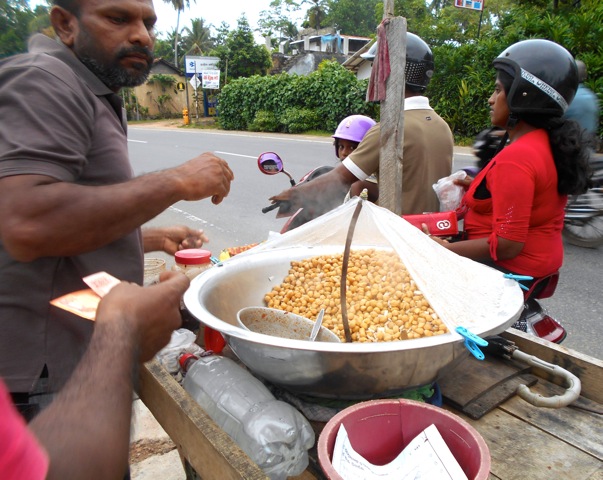 In a recipe for Chick Pea Soup as prepared in Greece, I found this helpful hint: “Soak the chick-peas overnight in water in which you have dissolved a good pinch of bicarbonate of soda. Rinse well, cover with fresh water and bring quickly to the boil. Pour away this water. Put the chick-peas in a large napkin or tea towel, and rub back and forth to get rid of the skins. Rinse under the cold water tap, when the skins will float away.”

Such sophistication is not apparent in Sri Lankan cooking of the kadalasnack. However, the chick-peas are boiled until they are tender. They are then tossed in a spicy mix of the cook’s devising. As a street food, kadala can be bought (in portions from Rs20) from vendors with hand pushed carts equipped with a charcoal burner to keep them warm.

My favourite version is sold by a vendor in the Galle Road at Ahungalla, near the Jetwing Calamansi Hotel. He let me try a sample, which made me decide to buy a larger portion than I originally intended. Why was it so good? Because it not only had the hard chips of coconut and slithers of dried chillies that are essential to this kadala street food snack, it also had dried tiny prawns adding an extra kick of flavour.

Definitely worth trying when you’re travelling around Sri Lanka.

Royston Ellis (http://www.roystonellis.com) is a British author resident in Sri Lanka since 1980