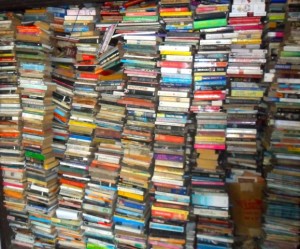 If you want a cheap guide book about Sri Lanka, a rare volume about ancient Ceylon, or a few paperback novels to read on the beach, Colombo has a street to thrill book lovers. It’s opposite the traffic island where D R Wijewardena Road meets T B Jayah Road near Maradana railway station.

I discovered these wayside book stalls over 30 years ago when I was looking for books about the history and manufacture of Pure Ceylon Tea. Here I found precious volumes, 1930s novels with art deco covers as well as old copies of Reader’s Digest, culled from the libraries of tea plantation bungalows.

It was due to the influence of the British when they were in Ceylon that these second hand book shops came into existence. A young man from Matara, Premadasa Weeraratne, was invalided out of the British Royal Navy in 1953 and, although he received a pension, he wanted something to do with his life. In the Navy he had noticed how the British officers liked to read. He also noted that British planters were selling up their possessions to return to Britain. Since plantation bungalows contained lots of books that the retiring planters were happy to get rid of, Premadasa saw a business opportunity.

He began to collect those books and took to offering them for sale on the streets of Colombo. He soon realised he needed a permanent base for his collection of books, and that’s when he arrived at Maradana, later setting up in D R Wijewardana Mawatha. His original shop is no longer there but his nephew, Sarath Thewarahennadi, also from Matara, is – and he runs Sarath Books. There are now seven second hand book stalls in the same place. 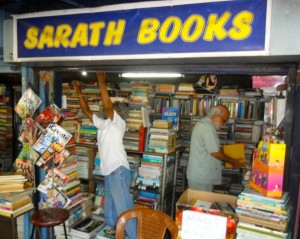 While all the shops stock general books, each one has its own speciality. One shop presents a wall of paperbacks catering for the mass market, another specialises in magazines. At Sarath’s the emphasis is on textbooks, but he also has some rare old volumes, including the third edition of Robert Knox’s book on Ceylon originally published in 1681.

His shop appears to be a disorganised jumble of books but Sarath knows where everything is. “It’s in my memory,” he says cheerfully. “My only filing system is my brain. If someone comes asking for a book by its title, I can name the author, and find the book, if I have it in stock.”

I tried him out when I wanted to re-read Kim by Rudyard Kipling. Sarath thought for a moment and then made a beeline for a shelf high above his head. An assistant brought a chair, he climbed on, and with a cry of triumph, found a Penguin Classic edition of Kim, just Rs250.

Sarath and his colleagues welcome visitors to browse through their stock and their
stalls are open every day, except Poya days, from 9am to 5pm.