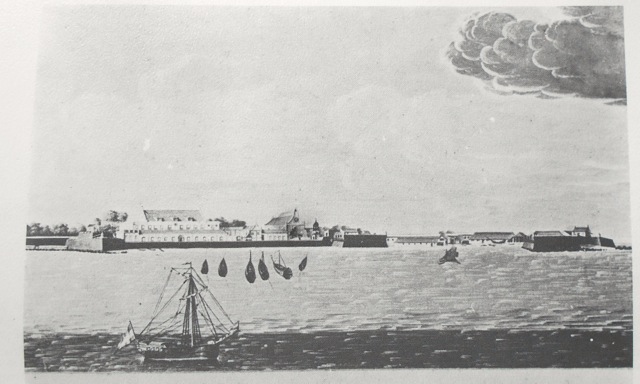 Mention the word “Fort” to any Sri Lankan and he will know you are speaking about Colombo not Galle, Trincomalee, Negombo or Matara which also have Forts. Curiously, Colombo actually no longer has a Fort although the name is officially preserved in the main railway station: Colombo Fort.

It is the old heart of Colombo that is colloquially known as “Fort” – a spoken reminder of the city of the past and its origins.

The original Fort of Colombo was a modest affair, a kind of glorified stockade erected by the Portuguese. Then around 1550it became a walled city, reaching from Galle Buck on the sea down to Kaymans Gate in Pettah, and defended on the eastern and southern sides by the Colombo (known as Beira) Lake. The Dutch captured the Portuguese Fort and kept the centre portion heavily fortified, while the settlementto the east outside the walls was called Pettah.

There was a water gate leading to the open roadstead where ships anchored, near the shoreon the north. On the south was the Galle Gate, where the road to Galle, 72 miles south, ran, much as it does today close to the sea shore. Inside the Fort were a few narrow roads along which no one was allowed “to gallop on horseback or in chariots.”

The circumference of the Fort in the 18th century was rather more than a mile. In 1807, the Fort had: “13 batteries, connected by intervening curtains, and were defended by 30 pieces of cannon.” The removal of the ramparts defining the Fort and the filling in of the moats below them was done by the military authorities between 1869 and 1871.

According to one historian this was done “because the fortifications were useless as such and kept out the breeze from the inside of the Fort…There is no doubt that what Colombo gained in space, light and air, it lost in scenic effect.” While another historian claims the Fort walls were abolished to satisfy the needs of 19th Century commerce, this remodelling of Colombodid coincide with the building of the first railway station (Colombo Terminus) and railway line (to Kandy).

This provided space on the south for the barracks and – in what became known as the Barracks Square – there was a cricket pitch that used to be exceedingly fast, according to an Englishman who bowled there in 1898.

Theorigin of the name Colombo is not clear. Writing in 1681 Knox says: “On the west is the city of Colombo, so called from a tree the natives call Ambo (which bears the mango fruit) growing in that place; but this never has fruit only leaves, which in their language is cola, and thence they called the tree Colambo; which the Christians in honour of [Christopher]Columbus turned to Colombo.”

Another suggestion is that the name is derived from Columba, or dove. These gentle birds are common in Sri Lanka. It is worth noting that the Dutch coat of arms of Colombo shows a mango tree with a dove in the centre.

Royston Ellis (http://www.roystonellis.com) is a British author resident in Sri Lanka since 1980