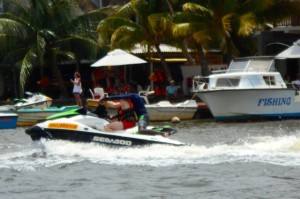 A popular outing for guests staying on the west coast of Sri Lanka is to take a cruise by boat, with an outboard motor, along one of the many broad rivers that flow into the Indian Ocean. The river at Bentota is near several mainstream hotels and has a lagoon at its mouth where local instructors teach tourist daredevils on jet skis how to send up showers of spray to startle more sedate river sightseers.

These jet-ski exhibitionists usually keep to the seaside of the three bridges that cross the river at Bentota, leaving the rest of the river inland for small safari boats. These can be hired at several places on the river bank from Rs1,500 for about an hour.

We hired a boat from a riverbank restaurant and puttered off noisily upstream, past the site of the village market and some beautifully designed modern houses as well as some sad old ones. The boatman suddenly cut out the engine so we could glide silently close to the river bank where he calmly pointed out a tree trunk in the grass. It turned out to be an enormous water monitor, the size of a crocodile, lazing in the sun.

The river was infested by crocodiles in colonial days and visitors would stop at the rest house at its mouth to have oysters for tea. The rest house and the oysters have gone but people living by the river sometimes catch young crocodiles (and young monkeys), which they keep for a few months to show tourists before letting them free. We watched a villager holding a baby crocodile that obligingly showed its sharp teeth. 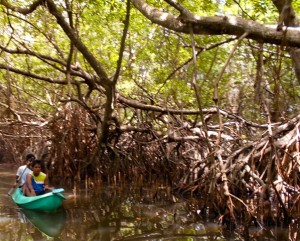 Exploring the mangroves by canoe

The big attraction of the Bentota river is at the southern side. Our boatman collapsed the awning that shaded us from the sun and cut out the motor. The boat drifted towards a tangled thicket of dangling mangrove roots as the boatman shouted to us to duck. Then it glided through a low, hidden opening into a cathedral of mangroves where the sun glistened through its leafy canopy.

A motorboat with tourists in life jackets was moored beside the bank while the boatman pointed out nature’s lurking marvels such as a watchful kingfisher, a sunbathing cormorant and a host of butterflies. To get the full effect of the tranquillity of the mangroves, ecologically aware tourists sometimes hire canoes to paddle themselves 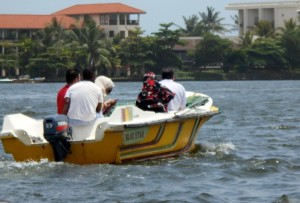 A Bentota river safari usually ends with a ride under the abandoned road bridge, the railway bridge and the new road bridge, to the broad basin of the lagoon. The view there is of riverside hotels and restaurants and boathouses where sporty youngsters prepare to windsurf, water or jet ski.

Bentota is known as the capital of water sports in Sri Lanka because of the facilities available there (including deep sea fishing and Scuba diving instruction). Further up the river, south of Bentota, the Jetwing Yathra houseboat is moored as floating accommodation that reveals some of the river’s secrets in five-star comfort.